Tiger Temple Thailand: Our Director in Thailand reacts to the agreement

The Thai government and Tiger Temple owners have come to an agreement over the future of the 146 tigers being used for tourist entertainment at the Temple.

"The lucrative business of exploiting tigers must be put to an end - they are bred in confinement purely for the entertainment of tourists and it’s a far cry from their natural lives in the wild."

Last week, the Department of National Parks, Wildlife and Plant Conservation (DNP) announced that they were intending to confiscate the tigers at Tiger Temple, due to concerns about the large-scale breeding and disappearance of some tigers.

Subsequent talks between both parties has resulted in an agreement: the tigers may remain on site, provided that the Temple no longer benefits commercially from the tigers and puts an end to the breeding of the animals.

If the Tiger Temple fails to follow the agreement, the DNP will continue its confiscation process.

Am Last, Director of World Animal Protection in Thailand, said: “We were rooting for the Thai enforcement to confiscate tigers from the Tiger Temple – this would have sent out a clear message about the unacceptable practices and the exploitation of tigers in tourism.

“However, the welfare of the tigers is the most important issue and we are pleased that DNP have negotiated the end to commercial and breeding activities with the tigers – this too sends a strong message that tigers belong in the wild, not as tourist entertainment.

“The lucrative business of exploiting tigers must be put to an end - they are bred in confinement purely for the entertainment of tourists and it’s a far cry from their natural lives in the wild. People are simply not aware that their ‘once in a lifetime’ experience means a lifetime of misery for that animal.

“We urge anyone tempted to learn the facts and help end this cruelty by avoiding wildlife entertainment attractions and choosing to see wild animals in the wild, where they belong.”

Every day, hundreds of thousands of animals suffer in the name of entertainment. Tourists are often unaware of the abuse that tigers in tourist attractions face behind the scenes.

To make them safe to handle, cubs are removed from their mothers at an early age and beaten for misbehavior. Conditions behind the scenes of animal parks are harsh, with tigers kept on leads or in small, barren cages and punished to train them and keep them under control.

The breeding of tigers to be kept under these conditions serves no conservation benefit and is allegedly linked to the illegal trade for tiger products.

Learn more about Before they Book and find out how you can be an animal friendly traveler.

Image: A tiger kept on a chain is used as a prop for photographs with tourists at an attraction in Bangkok, Thailand. 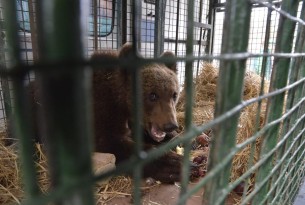 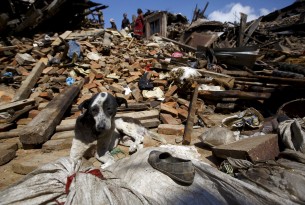 A team of our disaster response vets are preparing to deploy to Nepal to help animals who've been injured or left without shelter.