Team World Animal Protection is ready to run! On Sunday, March 20th, our first-ever team of runners will take on 2016 United Airlines NYC Half as they run through Manhattan and raise critical funds for animals in need.  Internationally recognized actress and animal advocate Evanna Lynch, Shea Taylor, Jill Onaitis, Monika Ressel and Nick Pegg will represent animals amongst a field of more than 20,000 runners.

Help us cheer our team along! Send a message to include in our card for runners on race weekend by e-mailing info@worldanimalprotection.us.org, subject line: Team World Animal Protection. Make a donation of any amount to the Team or to individual members by visiting our Crowdrise race campaign!

Learn how you can run for Team World Animal Protection, or host a fundraiser of your own.

Evanna Lynch is an Irish actress who rose to prominence for her portrayal of Luna Lovegood in the Harry Potter film series, appearing in four films. She has also appeared in numerous other film and television roles, including the independent drama My Name is Emily, due out in cinemas in summer 2016. She is a huge supporter of the work World Animal Protection does protecting animals across the world.

On running for World Animal Protection: I’m thrilled to be running my first half-marathon in New York City for World Animal Protection. Like them, I want to see a world where animals live free from suffering. I’m excited by this challenge and by the chance to raise awareness of the suffering so many animals experience. Together, we have a huge chance to protect them.

Animals she loves: My family and I always grew up with animals, we’ve had lots of cats, a dog, a rabbit, everything really. So it started there, my family are very compassionate towards animals, my dad is the kind who’d bring in frogs from the field and baby rabbits, so I’ve learnt a lot from them. I’ve always felt an affinity with animals because there’s something gentle about them, something very real. But they don’t judge you, and I’ve always felt very comfortable with them. When I was 11 years old I made the connection between meat and animals and how the pets that have homes are not any different to those being farmed. That’s when I started to think that there was something wrong with the way we treat animals around the world, and I wanted to do something to change it.

A Texas native, Shea Thurman Taylor lived in Washington, DC before moving to Brooklyn, New York. Shea works as a Human Resources Director and lives in Brooklyn with her husband and their French bulldog, Amsterdam.

On running the United Airlines NYC Half: This is my first half marathon! I have been a long-distance runner my whole life, and have successfully completed the Army Ten Miler race the last two years.

On training: I seek the advice of others!  What I can say from experience is that you have to put in the miles, and you have to take care of your feet!

Animals she loves:  I am extremely passionate about the plight of the rhinoceros.  It is so incredibly tragic...it just breaks my heart.  I think some of the horn devaluing research being conducted is extremely interesting, and I can only hope it improves their future in this world.

Nick traded in warm, sunny runs in his home state of Florida for runs through the streets and parks of New York City, where he currently lives with his fiancé Nicki, their cat Ollie, and their pup Winston. His favorite hobbies include running, snowboarding and spending time with friends and family. Nick recently got engaged, and he and Nicki (who is also running the Half!) are currently planning their wedding in Breckenridge, CO next January.

On running: I have run several half-marathons, but hope to get a PR this year!

His advice to fellow runners: Follow your training plan. Don’t make the mistake of going out too fast at the beginning and stick with your projected pace.

Why World Animal Protection? Animals provide so much happiness and joy for humans, the least I can do is make sure that they stay protected.

Animals he loves: Obviously, my puppy Winston means a lot to me. But, I am also very distraught by the poaching issues in Africa. These senseless acts against these amazing animals for their ivory need to stop.

Born and raised in Anchorage, Alaska, Monika now resides in Brentwood, California with her four beloved cats. She loves late brunches on the weekends and visits local cat shelters regularly to socialize cats and prepare them for adoption. A loyal friend to the animals, Monika and her boyfriend both foster kitten and adult cats yearly.

On running: I have done about 6 half marathons but this is the first in over ten years.

On tips for new runners: Pace yourself, and don't worry if it takes you longer than you thought it would. Also, stay hydrated, slow down to drink at every one to two miles, and start using rehydration drinks after about 90 min of running.

Why World Animal Protection? I have been following World Animal Protection for about 5 years now. I liked the fact that they address the needs of all animals globally. I thought their approach was very effective, tactful and it was clear that they were making a difference (I always look forward to reading their monthly newsletters.) I also found it very inspirational to read the autobiography of Princess Elizabeth De Croy and learn about her involvement.

On her support for animals: My heart hurts equally when I read about or see in the news that animals are being inhumanely treated, or are in dire strait situations. It is astonishing how much animals are taken advantage for monetary gains such as elephants, bears, monkeys.  I am so grateful that World Animal Protection exists. There is so much work to be done and we, as individuals, can only do so much.  World Animal Protection is the larger voice for suffering animals and they take action. I honestly feel a little more restful at night knowing that they are working tirelessly to help animals that I personally can't help.

Jill Onaitis was born and raised in Tulsa, Oklahoma and moved to San Diego / Solana Beach, California 16 years ago. Jill is a stay-at-home wife and mother, and she shares, “I have been married to an amazing man/father for 15 years and have one son that is 12 years old and two fur babies that are 10 and 2 (both rescues).” This will be Jill’s 5th half marathon; she reached a personal record last April when she ran the Oklahoma City Half Marathon in less than 2 hours! As she takes on the United Airlines NYC Half, she has already reached one goal: making a difference for animals!

On running: When I started running, it was mostly to stay "thin,” but I now realize the other benefits as well -- heart health, a natural anti-depressant, social time with my girlfriends, etc. The older I get, the more I have challenged myself.  My first two Half Marathons were in my 30s and I didn't do any special training and my times were a little over two hours.  My last two Half Marathons, in my 40s, I have followed Hal Higdon's Intermediate Half Marathon Plan (minus the speed work).   But this time around I am making my own "plan".   I broke my foot on December 10th and was not able to run for 7 weeks.  So I decided to cross train this time around with Orange Theory classes (circuit training on a treadmill, rower and weights/floor work), running outdoors once or twice a week (with my farthest distance being 6 miles) and throwing in a Hot Yoga Sculpt class here and there.  I am basically experimenting with a different training plan and seeing how this race will compare to my other 4 Half Marathons.  Wish me luck!   Another reason for changing up my race training plan, is because the last two Half Marathons I have run in my 40's.  I have ended  up with some sort of injury once I train past 7 miles.  So I decided to train to be stronger all over, because endurance has always been my strong suit.  I know I can go the distance, but I want to remain injury free.

On training: My advice to first time half marathoners…..DO NOT STRESS OUT ABOUT THE TRAINING OR YOUR RACE.  Running and racing is so mental!  If you miss a workout, that's okay!  I highly recommend core strength training, hot yoga (loosens the muscles) and/or weight training to cross train, to help avoid injury.  Also, on race day, walk through the water stations and take advantage of re-hydrating yourself.  My fastest Half Marathon time was April 2014 and I walked through EVERY water station (advice from my doctor, seeing I was injured and just wanted to get through the race)…  IT WORKS!  Also, bring good music so you can zone out, but keep the volume low enough, so that you can enjoy the experience and people around you.  Use chafing cream or stick.  And, do lots of stretching every day. I highly recommend using a foam roller to roll out your IT band.

Choosing World Animal Protection: I decided to run this race after finding out that 3 of my girlfriends got in through the lottery system.  I decided to run and knew I had to make a donation to a charity of my choice for my entrance/registration to the race.  I love animals, and my husband and I are supporters of many dog rescue organizations.  World Animal Protection caught my interest because it spans across many different areas of interest concerning animals and the problems and abuse animals face in all parts of the world.  It really bothers me that animals are still so widely used for entertainment purposes and that people are able to run puppy mills.

I feel happy and honored to run for an amazing organization.  Best of luck to everyone!  Cheers to a great race! 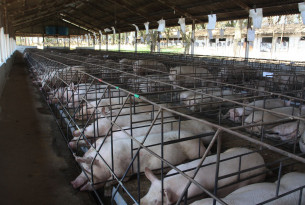 Survivors at home in special sanctuary for disabled bears 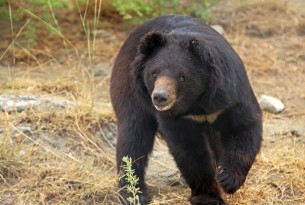 Bear baiting could be the very definition of barbarism. Some bears at our Balkasar sanctuary in Pakistan have suffered so badly in their former lives that they...

World Animal Protection’s new report found that dozens of companies that previously committed to end the use of gestation crates by their pork suppliers may...