What Does it Really Mean to Eat Like a Pig?

Just as a person’s happiness, health, and wellbeing can be affected by the foods they eat, a pig’s diet matters greatly for their welfare on farms. Unfortunately, modern factory farms prioritize bulking up the animals as quickly as possible to keep costs low, compromising their overall development and wellbeing.

The truth is completely different for a pig in their natural environment than one on a factory farm.

You have likely heard someone use the expression “eat like a pig,” a saying that conveys gorging oneself on either too much or too fatty of foods.

But what do pigs eat?

The truth is completely different for a pig in their natural environment than one on a factory farm.

Pigs have simple stomachs and an efficient digestive system that enables them to eat a wide variety of plant and animal foods, including vegetation, roots, fruits, eggs, flowers, leaves, fish, and dead animals. They are great natural foragers, using their iconic snouts to rummage through different media to find something tasty.

In a more natural environment with a varied and diverse diet, pigs are not likely to overeat, though they are likely to build and store fat. 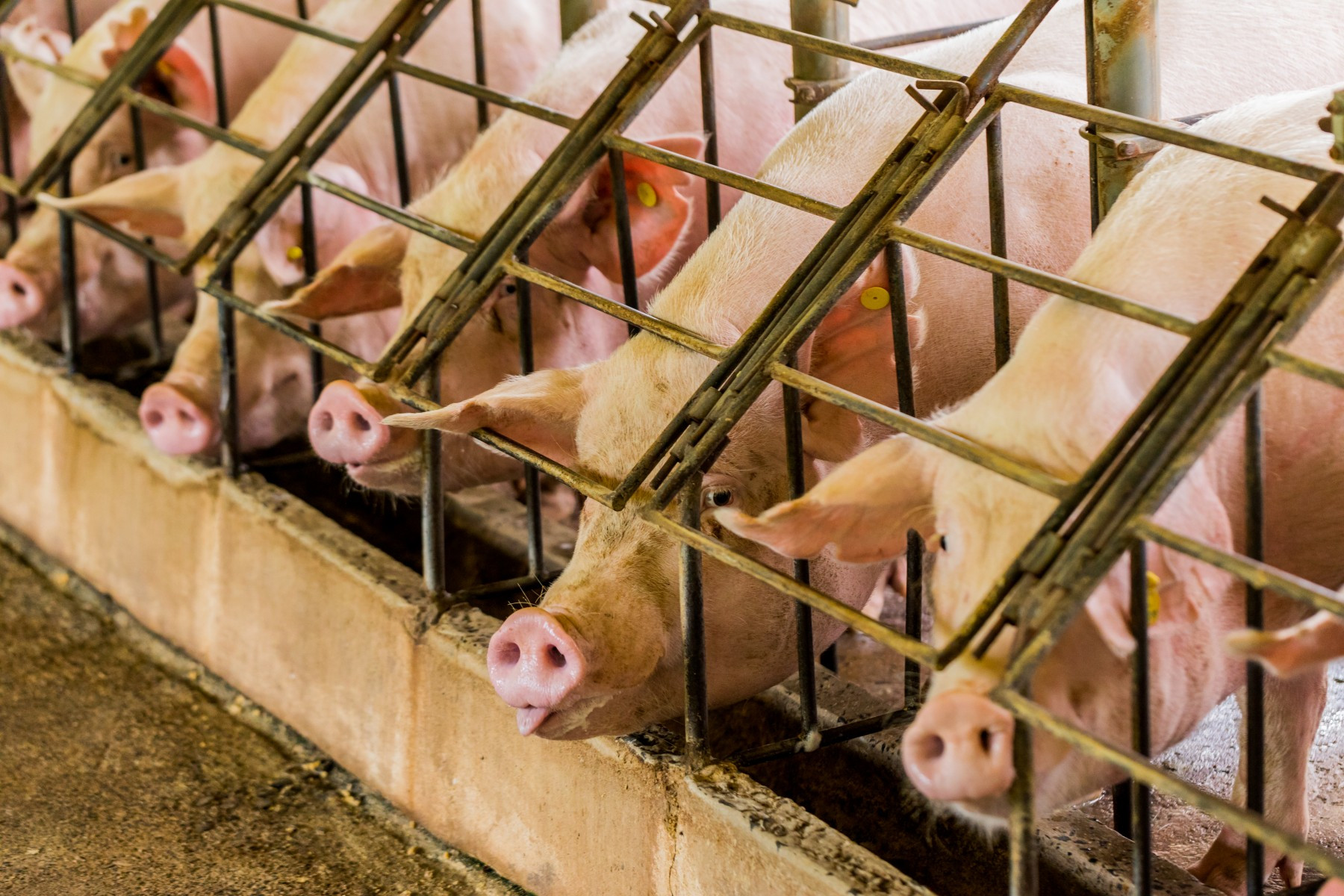 Modern factory farms, on the other hand, emphasize fast growth and leanness, promoting greater muscle development in as little time and with as little cost as possible.

Pigs raised in factory farms today have been bred for traits desired by an industry that treats them as commodities. Eating like a pig today is more like only eating the same processed high-protein energy bar every meal, every day.

Whereas the traditional domestic pig was a gregarious omnivore, pigs in factory farms are viewed as having one purpose: converting the least amount of grain into the highest amount of lean muscle in the shortest possible time. Breeding programs, combined with concentrated feed mixes and regular doses of antibiotics and other growth-promoting drugs, have turned pigs into “muscle-producing machines.”

These diets don’t just impact the pigs’ physical health. The monotony of the same concentrated feed rations every day leads to boredom and frustration. The lack of fiber in their diets prevents pigs from feeling full and satiated. What’s more, diets of female pigs used for breeding are severely restricted, keeping them in a state of constant hunger to maximize their litter performance.

Whereas historically, farmers fed pigs on local plants, table scraps, crop residues, vegetables, grains, tubers, and agricultural byproducts, commercial production relies on a complex global network of agribusinesses producing grains and oilseeds. These feed crops have a significant planetary footprint, produced on industrial, plantation-style farms with heavy applications of synthetic fertilizers and pesticides, and transported all over the world.

And really, commercial pigs primarily eat just two crops: corn for energy and soy for protein. In the US, the average commercial pig diet is 62.1% corn and 13.6% soy. This is not a healthy, balanced diet. So, factory farms rely on additives to ensure the animals get the nutrients and minerals they need to survive. Commercial feed mixes also increasingly include fish products for protein and amino acids, and in 2006 pigs ate about one-fifth of the world’s fishmeal.

While pigs would typically eat a wide range of plants and animals that humans cannot or do not eat, pigs in factory farms now consume a high volume of foods that otherwise could be eaten by humans. This is a highly inefficient use of farmable land and resources. 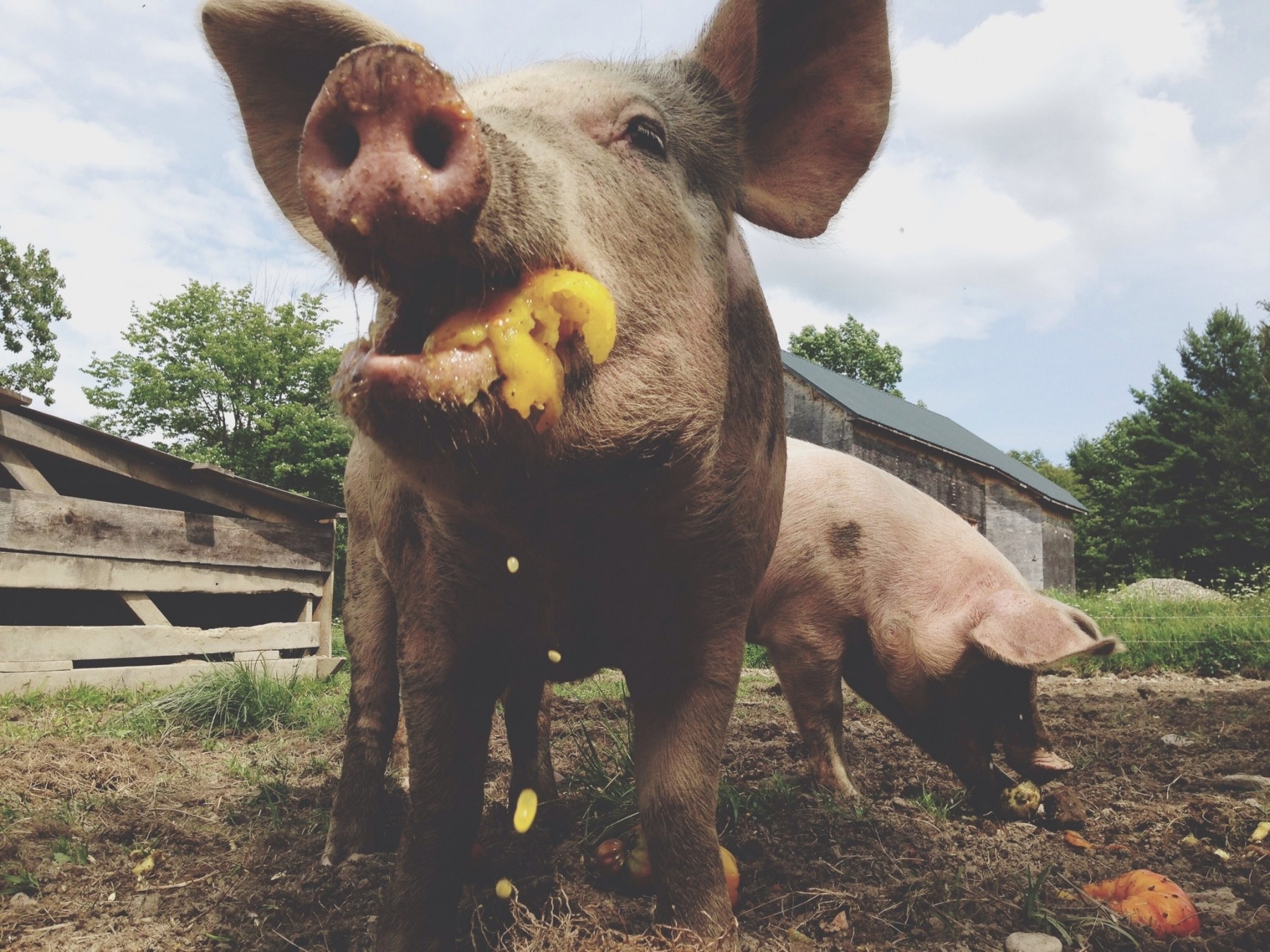 A humane and sustainable husbandry system would use one of the several remaining breeds that have been adapted to more diversified systems and can thrive on a more natural and varied diet. Research is currently underway to better understand the nutritional requirements of these breeds and identify innovative feeding practices, including more localized and eco-friendly sources such as rice husks and lucerne hay, that foster a sustainable scale of pig production and promote animal welfare.

Isn’t it time we once again let pigs eat like pigs? 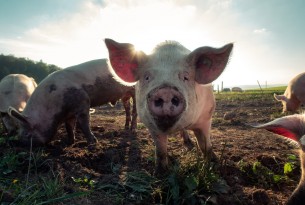 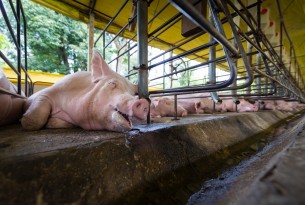