Life On A Pig Farm: Expectations vs. Factory Farming Reality

The very traits that make pigs such beautiful and intelligent creatures are stripped away when they are treated as cogs in a machine.

We're working to alleviate the most intense suffering inflicted in the production system through close confinement and barren environments.

Many people envision farms as big, open areas where farm animals are free to roam and given care to ensure they're raised healthily and happily.

But reality for the millions of pigs and other farm animals on factory-farms is much darker.

Let's take a look at how the expectation of life on a pig farm compares to the reality of a factory pig farm.

Yes, pigs prefer to work for their meals! Pigs are naturally diligent and are capable of solving complex problems.

They love to forage for food throughout the day using their extremely powerful noses.

This activity keeps them stimulated and is a much healthier way to consume and digest food.

On factory farms, feed is given as pellets in one large daily ration that the pigs will typically consume in just 15 minutes.

They are often fed on a floor made of concrete slats with nothing to root or explore.

Being fed in this manner is completely unnatural for pigs, and part of the reason they become bored, stressed, and unhealthy.

They love their families, and even pigs kept as pets mourn the loss of or separation from human family members.

On high welfare farms, mother pigs in open housing can often be seen bonding in the comfort of straw.

These are the beautiful social traits that make pigs so unique!

Pigs face so much cruelty and pain on factory farms.

One of the more shocking practices on factory farms is the performance of painful procedures on piglets.

Physical mutilations like castration or tail docking are painful, traumatic, and often done without anesthetic.

These horrific, unnecessary practices stem from the lack of space provided on factory farms, which leads to increased stress, tension, aggression, and fighting amongst pigs as they age.

Imagine being stuck in a tiny, smelly cage stuffed with people and given no freedom or stimulation.

When their piglets are born, their instinct is to closely monitor their babies and build a strong connection with them.

They will often perform suckle grunting to indicate when milk will be available, and this rhythmic grunting changes in speed indicating to the piglets when milk will arrive so that they behave accordingly.

By around 24 hours – newborn piglets will have already established their own teat and will return to this teat for every feed.

At 36 hours – piglets learn to recognize their mothers' unique "voice," and when they hear their mother’s suckle grunting, they will gather at the udder at their chosen teat for milk.

This behavior also prevents piglets from going to the wrong mother for milk.

Pregnant mother pigs on factory farms are crammed into tiny cages (gestation crates) where they can barely move.

This causes severe stress, discomfort, and prolonged suffering for such sensitive animals.

But their suffering doesn't end after they've given birth.

Mother pigs are then moved into farrowing crates (steel cages), which also restrict their movement and means they can see, but not reach their piglets to care for them properly.

Pigs need a lot of space and enrichment to stay stimulated, happy, and healthy.

Straw, rope, toys, and socialization are essential to keeping their tails wagging!

Factory farms crowd pigs into barren enclosures with solid floors, which are uncomfortable and painful for pigs to rest on.

A common practice is to have these floors slatted, which means pigs are defecating on the same floors they must spend all day on.

This lack of stimulation and unsanitary environment generates abnormal behaviors and contributes to the spread of various infections/diseases.

Changing the reality of pig farms

95% of pigs in the US live on the factory farms described above.

We're working to alleviate the most intense suffering inflicted in the production system through close confinement and barren environments.

Let's make this the year we truly begin to Raise Pigs Right. 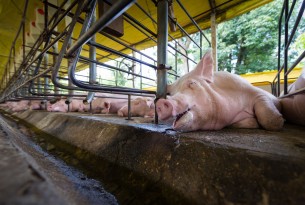