The extensive use of toxic pesticides in factory farming has detrimental effects on habitat loss and biodiversity.

The large-scale use of toxic chemicals to produce food for farmed animals is part of an inefficient system that misdirects significant calories and the resources consumed to create them for industrial production of farmed animals.

Pesticide Use in Farming

Each year, nearly 250 million pounds of insecticides and herbicides are applied in the US just to the corn and soy grown for animal feed. This large-scale use of toxic chemicals to produce food for farmed animals is part of an inefficient system that misdirects significant calories and the resources consumed to create them for the industrial production of farmed animals.

In the factory farming model, corn and soy have become the predominant ingredient in farmed animal diets as they are a cheap way to make animals gain weight at unnaturally fast rates. The production of corn and soy globally accounts for roughly 49% of all sales of highly hazardous pesticides. The overwhelming dedication of resources to produce crops for animal feed creates lasting issues, such as chemical runoff into waterways and toxicity to farmers and farm workers.

The market for pesticides is fueled by the need for a band-aid solution to an issue that arises in modern farming when the demand for animal feed overpowers the concern for sustainable crop practices. It is a system that prioritizes the maximization of profits at the expense of animal welfare, public health, and the planet.

The extensive use of these hazardous chemicals in feed crop production has detrimental effects on native species, habitats, and biodiversity. To supply the expansive system of animal agriculture, land is cleared out to make room for corn and soy farms, feed lots, and grazing pasture. This drastic conversion of land leads to habitat loss and threatens native species, many of which are endangered.

These species suffer further harm from the heavy use of toxic pesticides, and their population decline causes long-term issues. The decline of vital species, such as monarch butterflies and bumblebees, will drastically affect food supply and limit the capability of producing fruits and vegetables due to their reliance on these pollinators.

The loss of biodiversity because of pesticide use will put our ecosystems at risk and undermine the capacity to produce resources we need, such as clean air, fresh water, food, and medicine. It makes the ecosystems less resilient and contributes to environmental and biological downfall from factors such as climate change and pollution.

To stress the role that our appetite for meat and dairy plays in this chemical catastrophe, we created a digital report to show the extent of these effects.

By reducing the role of meat and dairy in our diets, we can curb the growth of factory farming and reduce our collective and individual pesticide footprint. Take the pledge and sign up for World Animal Protection’s Meating Halfway, a 21-Day Journey to Reduce Your Meat Consumption. You will get the support you need to eat less meat and improve the lives of animals! 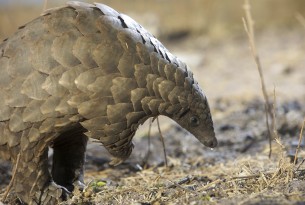