How the Meat Industry Is Harming Wild Animals

Wild animal populations are being decimated around the world and the meat industry is a major threat to their existence. 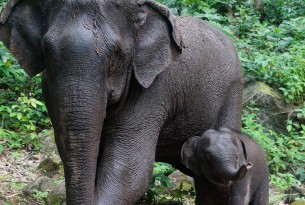 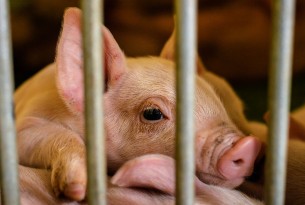 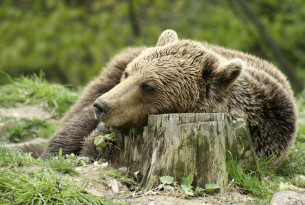 Every day, more animals are becoming endangered and extinct due largely from the actions of humans. Scientists, such as Raj Patel, an expert in ecology and food systems at the University of Texas at Austin, claims that we're seeing the sixth mass extinction of life on earth.

The biggest cause of wildlife losses is the destruction of natural habitats—much of it to create farmland—followed by killing animals for food.

When one species becomes extinct, harmful ripple effects put other animal species at risk, with Patel stating: "We're losing species we have never heard of, those we've yet to put a name to and industrial agriculture is very much at the spear-tip of that."

For example, if the food chain for wild animals breaks at any level, there is a negative domino effect on other species. Scientists found that humans are directly and indirectly causing species to go extinct, according to a study published by the Proceedings of the National Academy of Sciences.

The study examined 29,400 different species. A total of 515 species, including the vaquita (dolphin), the Clarion island wren, and the Sumatran rhino, have fewer than 1,000 individuals remaining. What's more, half of those 515 species have fewer than 250 individuals alive today. According to the 2020 Living Planet Index, wildlife populations fell by an average of 68% since 1970.

While humans are the problem, we're also the potential solution. The United States is one of the countries that consume the most meat, and animal agriculture has rapidly become one of the top lethal threats to wildlife today.

Culling of wild animals deemed a threat to agriculture

Each year, thousands of wild animals that the US meat industry deems to be a threat are killed. In 2013, the US Department of Agriculture (USDA) killed more than 2 million native animals including 5,326 coyotes, 3,700 foxes, and 419 black bears by cruel methods such as exploding poison caps, inhumane traps, and being gunned down from airplanes and helicopters. In 2018 alone,  68,292 coyotes were killed by the USDA. According to USDA's data, of the 2.6 million animals killed that year, 1.5 million were native species. It is likely these numbers are also underreported.

According to The Center for Biological Diversity, "the wildlife-killing program contributed to the decline of gray wolves, Mexican wolves, black-footed ferrets, black-tailed prairie dogs, and other imperiled species during the first half of the 1900s and continues to impede their recovery today."

So why is the USDA doing this? The USDA continues to kill wild animals mainly to make room and eliminate food and land competition for farmed animals. Agriculture in the United States uses approximately 900,000,000 acres of land—about 37% of the country's total land—for livestock and crops. While this is a major problem for wildlife in the US, it's also a global problem that requires global solutions.

According to the International Union for Conservation of Nature, of the 28,000 species threatened with extinction, approximately 24,000 are threatened primarily from animal agriculture. This is because half of the world's habitable land is used for agriculture and of that half, 77% of that is used to raise farmed animals for meat and dairy products, thus eliminating crucial natural habitats for species to thrive.

The biggest cause of wildlife losses is the destruction of natural habitats—much of it to create farmland—followed by killing animals for food, with 300 mammalian species being eaten into extinction.

Forests in Sumatra that are home to elephants and jaguars are being destroyed for palm plantations that generate by-products fed to farmed animals. Intensive, large-scale grazing in Tanzania is reducing the diversity of grasses and endangering food supplies for zebras, wildebeests, elephants, giraffes, and rhinos. Tanzania's large-scale cattle farming also encroaches on the few national parks these animals reside in.

More than half of the world's estimated 10 million species of plants and animals live in tropical rainforests, with deforestation and encroachment becoming more of a global crisis every day. Approximately 137 plant, animal, and insect species every single day are lost due to rainforest deforestation. That equates to 50,000 species every single year.

Brazil—the world's largest exporter of beef, providing close to 20% of the world's total beef exports—raises cows in the Amazon Rainforest, which is home to 427 mammal species, 1,300 bird species, 378 reptile species, and more than 400 amphibian species. Many experts have suspected cattle farmers started the 2019 Amazon fires while trying to clear land for more ranching.

Historically, the majority of fires started in the region have been linked to expansion of agriculture. As a result, the wildfires rapidly spread, dispersing, and killing native wildlife. World Animal Protection's Disaster Management Team was deployed to help rescue and save animals who had been affected. 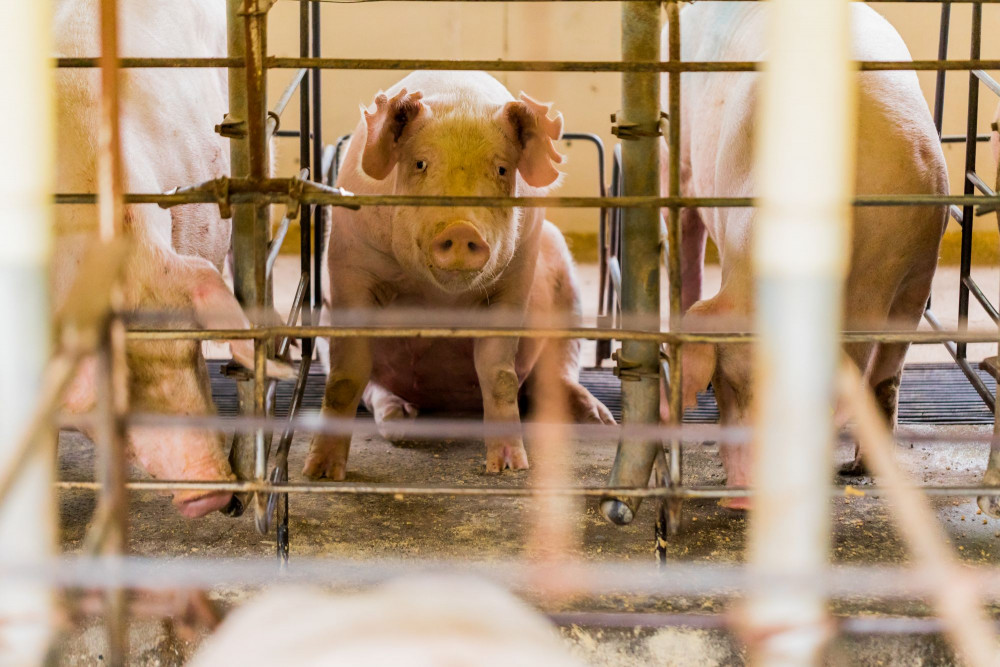 Animal agriculture is responsible for nearly 15% of climate emissions globally—more than all the cars, trains, planes, and other forms of transportation combined.

Meat Production as the Cause

In the past 50 years, meat production has more than quadrupled globally, currently producing more than 320 million tons each year. Expansion and consolidation of the meat industry paved the way for cruel, low-welfare factory farming—with 80 billion animals killed for food each year—but also continues to negatively contribute to our environment and the animals we share it with.

To be blunt: factory farming is killing our planet.

Factory-farmed animals—chickens, pigs, cows, and turkeys—are bred and raised en masse, and their urine and manure is stored in huge lagoons that can be as large as several acres and hold as much as 20-45 million gallons of waste. Lagoons can overflow, rupture, or leak. The manure kept in them is often sprayed out into fields at unsustainable rates, leaking into nearby rivers and streams. Not only does spraying the waste add to water pollution, this method increases evaporation and vaporization of pollutants.

The toxins in fertilizers and manure runoff exacerbate oceanic dead zones—algal blooms that create oxygen-deprived pockets. The largest oceanic dead zone, stretching nearly 8,200 acres, was recorded in 2017 in the Gulf of Mexico. According to a report, Tyson Foods was the main contributor to the dead zone after dumping more than 104 million tons of pollutants into waterways in the past decade. Marine life, unable to survive, either fled the area or died as a result.

Tyson isn't the only meat producer that causes environmental devastation. Cargill, the second-largest cattle feed processor, is "responsible for more than half of the nitrogen and a quarter of the phosphorus that finds its way into the Gulf of Mexico," which—combined with Tyson—helped create the 2017 dead zone the size of New Jersey. Both Tyson and Cargill supply large fast-food chains with meat products.

Tyson and Cargill were not only major water polluters in 2017, but combined with JBS, they created more greenhouse gases than all of France and nearly as much as oil conglomerates like Exxon Mobil, BP, and Shell. Since few meat and dairy companies publish their climate emissions (and they are not legally required to do so in the United States), reporters at The Guardian estimated the corporate emissions from farmed animals using methodology created by the UN FAO. The article states:

We've found that the top 20 meat and dairy companies emitted more greenhouse gases in 2016 than all of Germany, Europe's biggest climate polluter by far. If these companies were a country, they would be the world's seventh-largest greenhouse gas emitter.

Shocking, right? Animal agriculture is responsible for nearly 15% of climate emissions globally—more than all the cars, trains, planes, and other forms of transportation combined. According to the FAO, "industrial meat and dairy production alone will undercut our ability to keep temperatures from rising to an apocalyptic scenario." 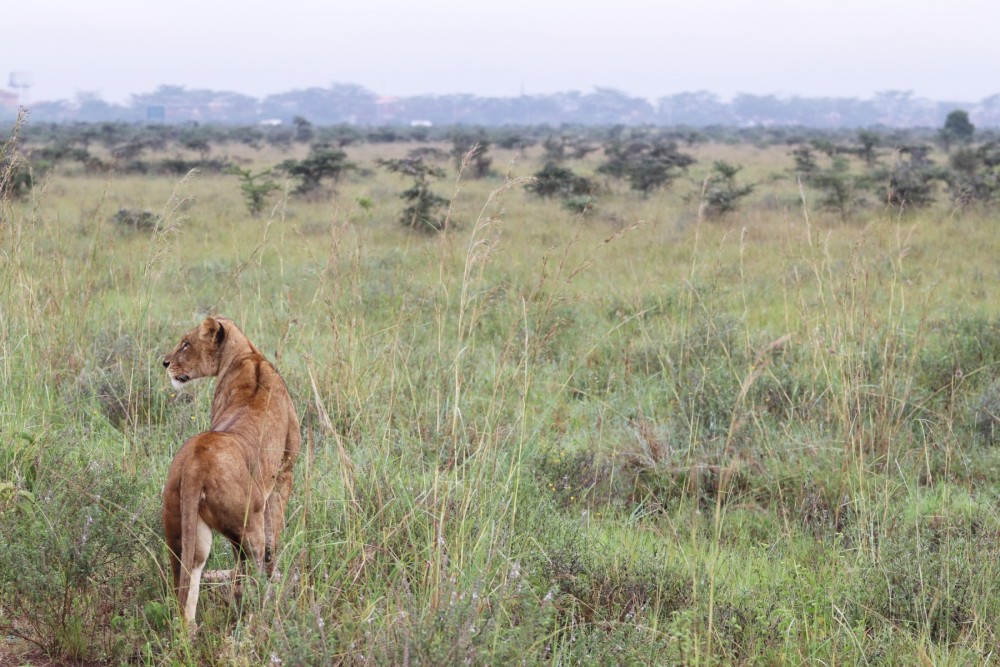 By choosing to eat less meat—whether one day a week or one meal a day—you can lower your dietary carbon footprint and take steps to protect all animals.

While there are many ways to protect wild animals, the link between protecting wildlife and farmed animals cannot be ignored.

Factory farms are one of the biggest contributors of climate change, which has already destroyed wild animal habitats and threatened biodiversity. Polar bear habitats have shrunk drastically due to our warming earth, with populations estimated to decline one-third by 2050. Bees, essential pollinators to the world's crops, cannot withstand the hotter temperatures associated with climate change. Scientists estimate that climate changes and reduced land cover will destroy 68-81% of remaining orangutan habitat by 2080 because of increased drought, wildfires, and food scarcity.

By choosing to eat less meat—whether one day a week or one meal a day—you can lower your dietary carbon footprint and take steps to protect all animals. According to Stephanie Feldstein of the Center for Biological Diversity, "that carbon footprint of meat production is more than just a big number. For polar bears, it's a factor in whether or not they'll live to see the end of this century."

By removing our support from cruel factory farms, introducing more plant-based foods into our diet, and lowering the demand for cruelly-produced meat and dairy products, we can shift the industry towards a more sustainable food system and phase out the climate catastrophe that is factory farming.

So, what are you waiting for? Join the movement of people committed to helping animals and the planet by pledging to reduce your meat consumption today.