Since they were taken from their mother as tiny cubs, 24-year-old sisters, Masha and Laura, have known nothing but cruelty and misery. In 2019, they were finally given the lives they deserve.

It was impossible to be untouched by the story of these two sisters - Cristina Lapis, Founder (AMP)

Forced to perform heartbreaking tricks as the star attractions at Ukranian circuses, Masha and Laura (female brown bears) were subjected to horrific cruelty and filthy conditions for most of their lives.

From balancing acts to acrobatics - even riding bicycles - these poor bears were exploited and abused for the entertainment of paying audiences.

When not in the ring, they spent their days imprisoned in tiny, dirty cages barely big enough for them to turn around in, waiting for their next performance.

The cages Masha and Laura were kept in in between performances

But now, their nightmare is over....

Laura and Masha have been rescued from the circus by SOS Zoo and Bear Rescue and The Lawrence Anthony Earth Organisation (LAEO), and will now move to their new home at Libearty Bear Sanctuary in Romania - run by The Millions of Friends Assosciated (AMP) and supported by World Animal Protection.

Cristina Lapis, Founder and President of AMP, says "Although Libearty is here to save bears kept captive in Romania, it was impossible to be untouched by the story of these two sisters. Masha and Laura deserve to enjoy the life as normal bears - to climb the trees, dig for roots and build dens in winter."

With 69 acres of lush oak woodland, swimming pools and expert, individualised care, it will be a world away from the dirty cramped cages and circus canopies they have always known.

The sanctuary staff are now preparing for Masha and Laura's arrival, and will dedicate themselves to rehabilitating the sisters so they can enjoy the life of a real bear.

"Bears who come to us from the circus are usually emotionally and psychologically affected." Cristina explains, "They may be free from the circus now, but it will take a lot of care for them to escape their mental cages and help them forget their old life."

Click hear to learn more about our work to free animals from entertainment around the world. 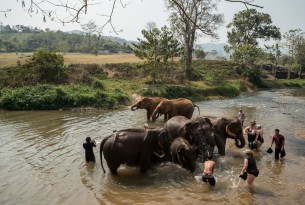