Pigs are often associated with negative labels such as ‘filthy’, ‘lazy’ and ‘greedy.' But why is the word ‘pig’ used as an insult, and is there any truth to it? Gemma Carder, our sentience manager, explains:

Pigs are very smart, and can even use mirrors to assess their environment. When pigs were shown a reflection of their food bowl, they used the reflection to locate their food.

The reality beyond the stereotypes

Science shows pigs are emotional, smart, inquisitive animals, who engage in a range of complex behaviors. When you look at it this way - they don’t deserve to be connected with commonly-used insults.

Contrary to the idea that pigs are lazy - some of them are keen swimmers. In the Bahamas there is a small, uninhabited island where wild pigs enjoy swimming in the clear waters.

Pigs are social animals. Research shows they enjoy playing together [1] (which can even be encouraged by music [2]), are empathetic, and are affected by the emotions of other pigs [3].

Piglets are attached to their mothers and are known to scream in distress when they are separated.

Pigs are very smart, and can even use mirrors to assess their environment. When pigs were shown a reflection of their food bowl, they used the reflection to locate their food [5].

They are often seen as filthy, but pigs actually use mud as sunscreen to protect their delicate skin, which is prone to burning in the sun.

The complex needs of pigs are often not met on farms

Pigs descended from the Eurasian wild boar, and there is little difference in the behavioural needs of domestic pigs from those of their wild ancestors [6]. For example, they need space and the opportunity to forage to be happy and healthy.

In poor welfare farming systems, pigs often do not have the chance to behave in the way they need to, for example playing and foraging.

Studies show pigs housed in close confinement with one another are more aggressive [7], and often demonstrate their mental suffering through bar and tail biting.

These behaviours usually occur when pigs are frustrated, bored and have a lack of control over their surroundings.

Regardless of negative associations with pigs, research has proven that they are no different to many other animals, including the pets we share our homes with.

Pigs feel a range of complex emotions, and can suffer both physically and mentally.

We’re working with companies in some of the biggest pork producing countries to promote higher welfare farming alternatives, such as indoor group housing and free-range farming. We want to see a world where every pig farm is designed around the welfare needs of the animals.

Read about how we’re improving the lives of 70 billion farm animals. 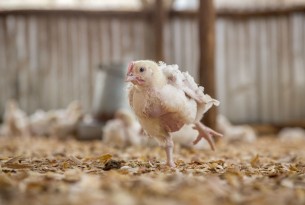