“Bullfighting is cruel and outdated and has no place in a modern society; culture stops where cruelty starts.”

The same bulls who slip and slide down Pamplona's cobbled streets will be stabbed to death in the town's bullring later that day.

Tourists who take part in the Running of the Bulls in Spain are contributing to the carnage. The industry survives only because of huge subsidies as well as tourists who unwittingly fuel the abusive events.

Please be aware that the video contains graphic and potentially disturbing images.

Each bull used in a fight is repeatedly speared and stabbed before the matador attempts to sever the exhausted animal's spine with a dagger.

“The abuse that the bulls face at Pamplona is barbaric. We urge everyone attending to help end this bloody spectacle and the cruel treatment to these animals,” said Dirk Verdonk, Head of Programmes at World Animal Protection Netherlands.

In some cases, the bull drowns in his own blood before the dagger even comes into play. Other times, the bulls are still alive and their broken, bleeding bodies are dragged out of the arena and left to await slaughter.

“Bullfighting is cruel and outdated and has no place in a modern society; culture stops where cruelty starts,” Dirk continued.

Bullfighting has been on the decline for years – attendance is decreasing, and bullrings are closing across countries that still permit bullfights. A recent poll showed that 76 percent of Spanish people have no interest in bullfights.

"Putting an end to animal torture in Spain is not only a matter for Spaniards", said Marta Esteban, President of Torture Is Not Culture. "The EU subsidises bullfighting with more than 150 million euros per year, and this, along with the curiosity of tourists from all around the world, allows this cruel spectacle to continue. Only 19 percent of Spaniards actively support bullfighting, so it really is a dying industry.”

Read more about our work to end animal suffering due to cruel wildlife tourist attractions. 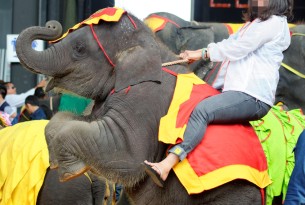