The treatment of farm animals is the world’s biggest animal welfare issue – and it’s getting bigger.  More than 70 billion animals are farmed for food each year, two-thirds of them in conditions that mean they can’t move freely or live naturally.

China is home to over half of the world’s pig population, and demand for pork has meant many food suppliers are overlooking animal welfare in favour of low cost meat – resulting in the suffering of millions of pigs every single day, with sows confined in crates or cages for most of their lives.

Oue new survey*, reveals an appetite for change in China. Almost 90% of Chinese consumers surveyed said they would be willing to change their purchasing habits, to move to pork products from pigs that have lived better lives.

Chu Xueqin, Campaign Manager, World Animal Protection China, said: “There is a growing awareness among Chinese people about the importance of animal welfare, and a growing demand for the food we eat to come from farm animals with a better quality of life."

“In industrial farming pigs are being kept in cruel, cramped and barren conditions, for the majority of their lives. These highly intelligent and social animals will resort to biting each other, and crowded conditions can lead to the spread of infection, increasing the need for antibiotics.”

We are working to to create better lives for pigs – because all animals deserve a life worth living. We are moving the pig industry, farmers, retailers and the government to adopt higher welfare alternatives to intensive pig farming; encouraging farmers to adopt better welfare standards for pigs, and supermarkets to listen to consumers and offer better welfare pork products.

“The message is loud and clear for farmers, food suppliers, and supermarkets: consumers want to see higher welfare pork on the shelves,” Chu Xueqin added.

“Good animal welfare is good for pigs, good for people, good for business and good for China's sustainable development.”


World Animal Protection China, has produced an educational video with English subtitles, inviting more consumers to make their demand for higher-welfare pork heard by the industry. 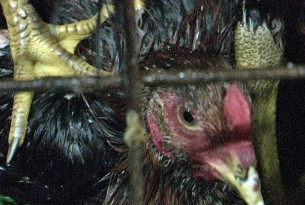