9 Reasons Why You Should Eat Less Chicken

Chickens are among the most abused animals on the planet.

Sadly, chickens are some of the most abused animals on the planet. From cruel mutilations like debeaking to being bred to grow at unnatural rates, chickens on factory farms live miserable lives.

Every year, Americans consume 8 billion chickens. In the United States – one of the countries that eats the most meat – chickens account for roughly 98 percent of the land animals raised and killed for food. Sadly, this number continues to grow year over year. In fact, in 1970, the average American ate about 50 pounds of meat from chickens a year. Whereas today, it’s more than 100 pounds.

America’s overconsumption of chicken meat is fueling big multinational businesses and causing even bigger problems when it comes animal welfare, the environment, and public health. Let’s look at why you should eat less chicken.

According to the USDA, around a quarter of all cut-up chicken meat and half of all ground chicken sold in stores is contaminated with salmonella.

Each year, salmonella sickens more than 1 million people and results in more hospitalizations and deaths than any other foodborne illness. 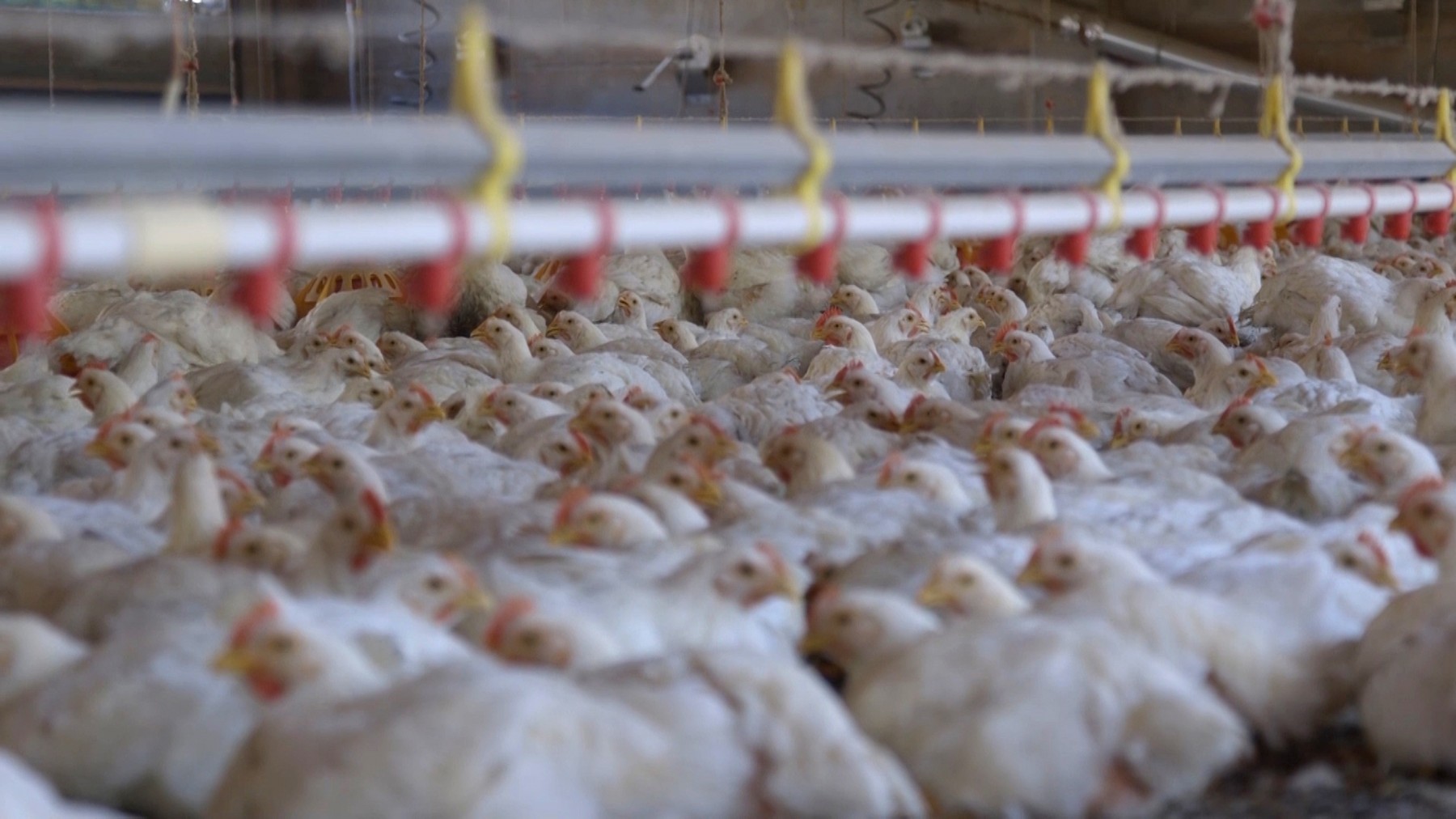 2. Modern chickens have been bred to grow at cruel rates.

Chickens raised and killed for meat have been bred to grow so quickly they often become immobilized under their own body weight and endure devastating pain. In fact, chickens raised on factory farms weigh around 365 percent more than their 1950s counterparts and go from hatching to nearly six pounds in just 48 days. To put that into perspective, it would be like raising a 500-pound ten-year-old human child.

Due to rapid growth and often being unable to walk in overcrowded conditions, chickens nowadays are fatter than years prior, leading to meat that contains 224 percent more fat and 9 percent less protein.

4. Regular consumption of chicken has been linked to numerous diseases. 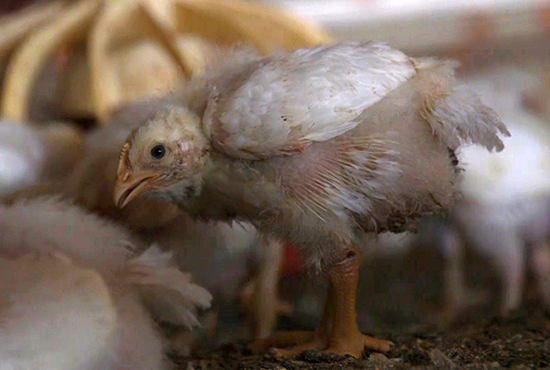 5. Chickens are among the most abused animals on the planet.

Sadly, chickens are some of the most abused animals on the planet. From cruel mutilations like debeaking to being bred to grow at unnatural rates, chickens on factory farms live miserable lives. However, to make matters worse there isn’t a single federal law protecting chickens from abuse. While there aren’t currently any federal laws protecting animals during their lives at factory farms, the law that’s supposed to protect animals at slaughterhouses, the Humane Methods of Slaughter Act, doesn’t extend to birds, leaving chickens with virtually no protection from blatant cruelty. 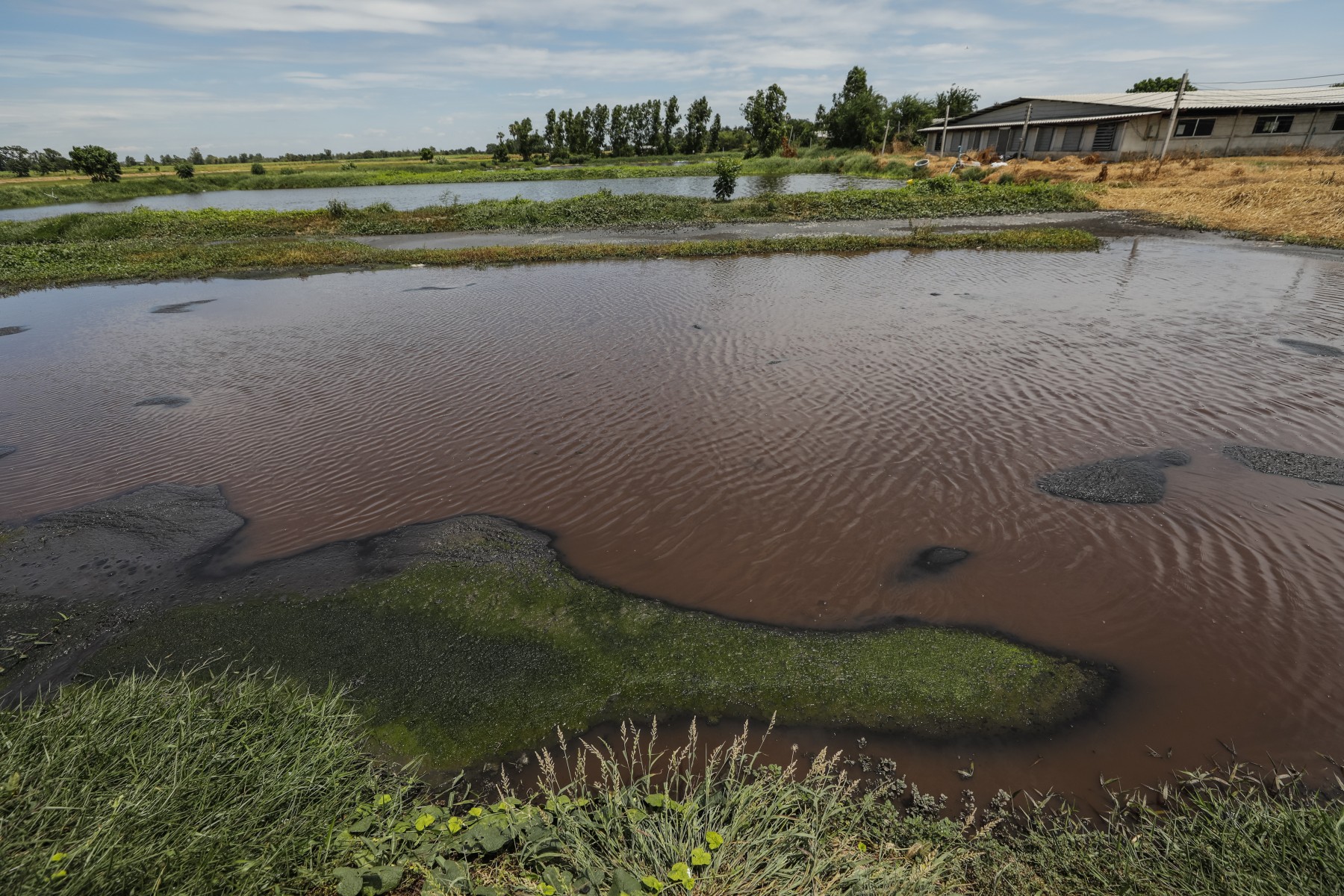 Reporting by Environment America found that Tyson, the world’s largest poultry producer, is responsible for releasing more toxic pollution into our waterways than companies like ExxonMobil and Dow Chemical. 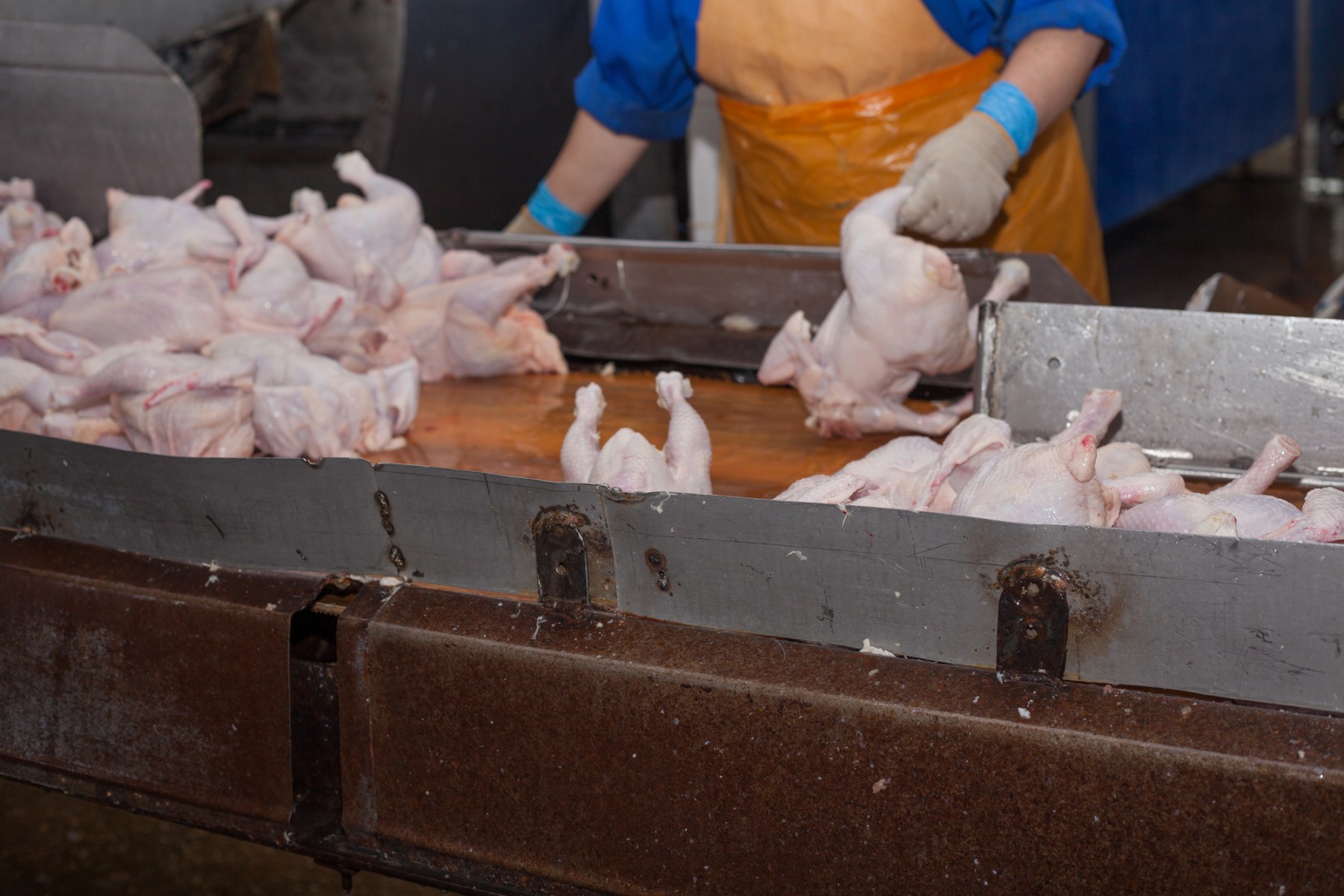 From being forced to wear diapers because they’re denied bathroom breaks to losing limbs, workers on chicken farms experience terrible working conditions. Just recently during the pandemic, one big multinational meat corporation allegedly exploited their employees making bets on how many workers would get sick from COVID-19 and pressuring elected officials to keep processing plants open despite not having proper personal protective equipment. 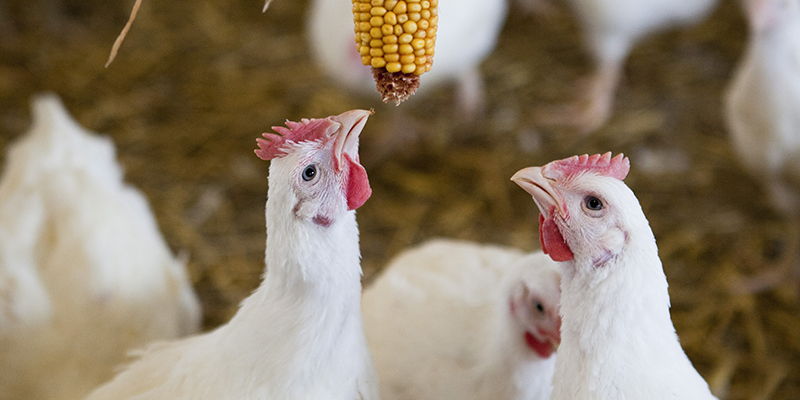 Chickens are intelligent and sensitive beings, deserving of good lives. Did you know that they pass down knowledge from generation to generation? These smart birds are also able to recognize more than 100 individual faces, not only of their fellow chickens, but also of humans. What’s more, they’re even capable of understanding that recently hidden objects still exist – demonstrating a level of problem-solving beyond the capability of a two-year-old child!

9. Plant-based chicken is tasty and nutritious. 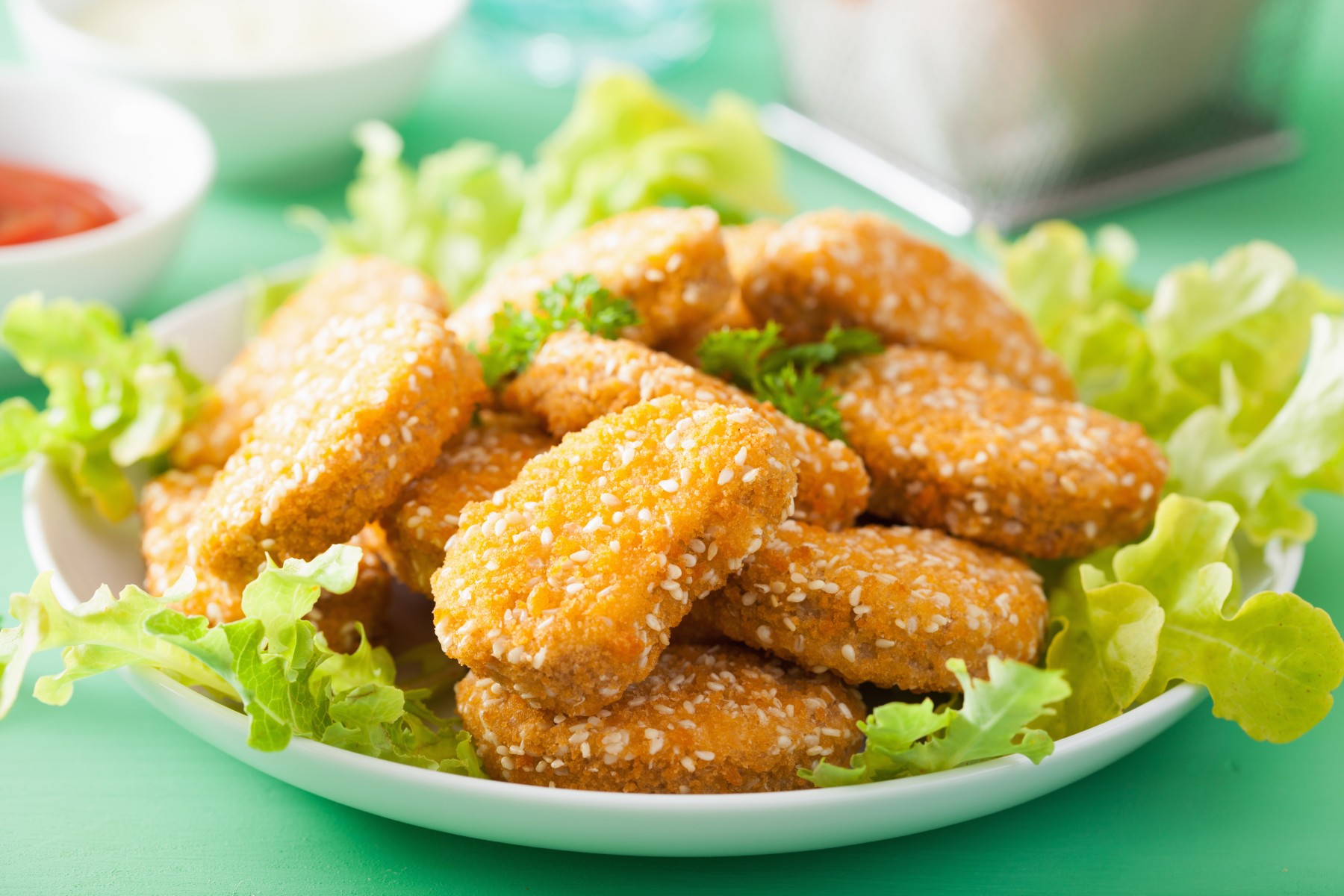 The good news is eating less chicken is easy, delicious, and nutritious thanks to the many plant-based options available on the market. From Quorn’s chicken pieces to Daring Food’s delicious crispy chicken, to Nuggs’ amazing nuggets, swapping chicken meat for a plant-based option is a delicious decision that you can feel good about.

---
Help improve the lives of chickens, protect the planet from harmful pollution, and improve your health by eating less meat. Get started by joining Meating Halfway, a 21-day journey that’ll guide you towards eating less meat.

While you’re at it, join us in asking KFC to add a plant-based chicken option as a permanent fixture to its menu nationwide. Take action today! 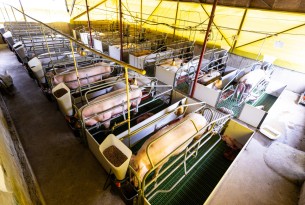 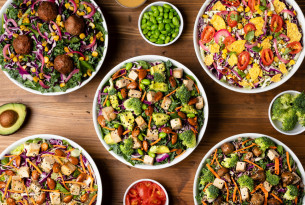